Following up a brief testing period and the beta users, WhatsApp began to roll out its new calling interface to all iPhone users. The popular messaging app has now made it a lot easier for the users to add up more people to an ongoing call and with other improvements.

As the sources covered on the 9to5 Mac last week, these changes were already available for the users who have the beta version of the WhatsApp app installed on their smartphones. The new calling screen of the app looks quite similar to the FaceTime app that shows everyone’s profile picture, which is there on the call. 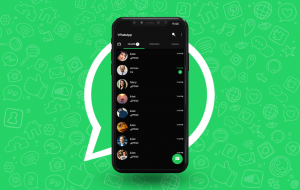 From there, the users can easily invite other people to join the connection. It will also support calling a person once again if they cannot accept it or disconnected during the call.The recent release notes for WhatsApp version 2.21.140 have also mentioned that the archived chats will now remain archived and muted whenever new messages are received.

The updated version also shows the suggestions of appropriate stickers according to the type of message a person sends when the user is writing up the message.However, according to the messaging app, these new features are being released slowly and steadily to the users. Therefore, all the new features would not be available right after the updates. WhatsApp is available for free on the App Store and requires an iPhone with iOS 10 or further released iOS systems.