Uber and Waymo have put the past behind them and are now committed to staying in the game for the long term. The two corporations, once legal adversaries, established new cooperation on Tuesday. Waymo’s self-driving technology will be used with Uber Freight’s shipping network to help automate long-distance transportation. According to a Waymo news release, the firms aim to “bring together the capability of the Waymo Driver with the size of Uber Freight’s marketplace platform, ultimately allowing the safe and scalable use of the “Waymo Driver on America’s roadways.”

Waymo and Uber are both already in the long-haul transportation industry. Waymo Via, a subsidiary of Google’s Alphabet, is now testing autonomous driving technology (which still requires human supervision) on Trucks in California, Arizona, Texas, and New Mexico. Uber also operates Uber Freight, which is essentially a traditional Trucks firm. 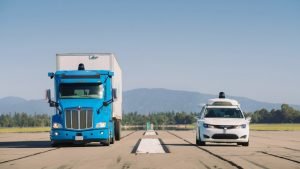 They’re expecting to conduct a mega shipping takeover now that their capabilities have united. “Both companies envision a future in which autonomous Trucks take on the long-haul portion of driving, alleviating some of the burdens of rising freight demand while also allowing drivers to shift into shorter-haul jobs that improve the occupation’s quality of life,” according to an Uber press release.

The partnering service will be implemented in phases. First, Waymo’s experimental fleet of self-driving Trucks will be integrated into Uber’s freight network. Following that, the businesses intend to let other freight carriers with Waymo-equipped vehicles to participate as well. Waymo owes a lot to Uber’s autonomous car division already. Waymo earned $245 million in company equity after suing Uber in 2017 over stolen trade secrets. When Uber bought Otto, another self-driving startup, in 2016, the legal issues began. Anthony Levandowski, the creator of Otto, was a co-founder of Waymo and took private corporate secrets with him when he left the Google subsidiary.