Twitter launches a beta program called Ticketed Spaces, which will be a new monetisation tool for its Spaces audio features. Spaces are the live audio chat option on Twitter, which has rolled out to all users with more than 600 followers on the platform.

Twitter said it is launching an application program for individuals who will be able to see the application process on Android and iOS. However, it will be restricted to users based in the US for now. It is also introducing applications to be part of the test groups for Super Follows, which is an upcoming subscription-based feature aimed at creators on the platform. 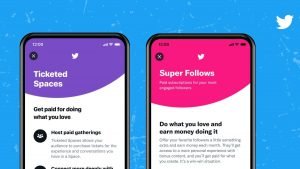 According to Twitter, people will be eligible to earn up to 97% of revenue from these features after in-app purchase fees, which means in effect it will only charge 3% as fees. This 3% revenue slice is only till someone earns $50,000; after this, the company plans to charge a 20% revenue share.In a series of tweets Esther Crawford, Senior Product Manager at the company explained that the company’s goal is to elevate people driving the conversations in the company. This helped them earn money, adding that they updated revenue share cuts after spending more time thinking about how we could support emerging voices in the company.

Crawford explained the reason behind setting $50,000 as a limit because it shows that by earning this amount from Super Follows and Ticketed Spaces that the creator is getting value from these features and that they’re helping them in making money. After this point, the company’s share will increase to up to 20% of future earnings after fees.