The Biden Administration Smuggled 40,000 Covid Patients in US Cities The Biden Administration Smuggled 40,000 Covid Patients in US Cities

According to the nation’s former border commander, the Biden administration has smuggled 40,000 coronavirus-infected illegal immigrants into American communities. Former acting Commissioner of Customs and Border Protection Mark Morgan told Secrets this afternoon, “At least – that’s conservative.” Morgan claimed that around 270,000 illegal immigrants have been let into the US since President Joe Biden took office, signalling to Latin America that the border is open again, as it was under former President Barack Obama, in an earlier Zoom briefing.

However, Morgan claims that this border crisis is unlike any other because of the ongoing viral spread around the world and the Department of Homeland Security’s failure to test all individuals being shipped to cities. His remarks came after the Department of Homeland Security estimated that 213,000 illegal aliens crossed the southern border in July, a 20-year record. 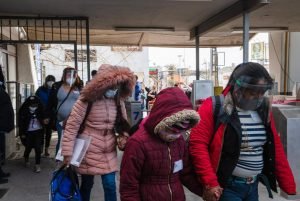 Morgan is well-versed on border issues and has maintained his contacts. He recently furnished Secrets with photographs of migrants being held in appalling conditions in overcrowded facilities and being pushed under bridges while awaiting processing. He focused on health difficulties, the perils of allowing COVID-19-infected people into the country, and how it has harmed the Border Patrol during the briefing.

COVID-19 infections have increased by 900 percent in some regions along the Rio Grande border, according to Morgan. And many of them are never put to the test until they get at their destination. They are not being tested by DHS. So, what is Secretary of Homeland Security Mayorkas’ solution to all of this? ‘Ah, that’ll be up to the local communities to handle.’ It’s now your concern and issue to deal with.