About three of the James Webb Telescope instruments were used by the scientists to capture the image of this stunning tarantula nebula. When the scientists viewed it with the near infrared camera, the silk filaments could be seen that surrounded the cluster of the massive bright blue star in the middle. NASA said tens and thousands of such tiny stars were seen before they were hidden by the cosmic dust. 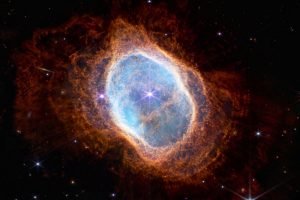 The Near infrared spectrograph of the James Webb Telescope saw one star that was trying to emerge from the dusty veil. The mid infrared instrument of the Webb Telescope was used for viewing the nebula and capturing this gorgeous image.

The Tarantula Nebula is an enticing subject for scientists who are into the star formation as it involves study the chemical compounds alike the star forming regions during the cosmic moon of the universe. Cosmic moon is the period when the entire universe was just a billion years old and the stars were starting to form. the images of Tarantula Nebula can assist scientists to compare the observations of other distant galaxies from the cosmic noon period and help them analyze and understand the beginning years of the entire universe