Southwest Airlines declined to elaborate on what these “gestures” might entail. However, Southwest and its passengers have suggested on Twitter that the company is providing “LUV Vouchers” for future travel with Southwest Airlines, worth up to $250. However, not everyone appeared to be pleased with the offer of vouchers. Some Twitter users claimed that they couldn’t get in touch with Southwest to obtain their vouchers at all, while others said that the vouchers weren’t enough to cover the costs of finding food, motels, and different forms of transportation. 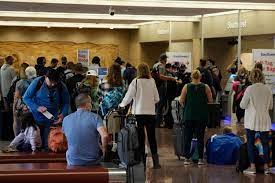 Other consumers have complained on Twitter that they have yet to get a reimbursement for their canceled trips.  are eligible for reimbursements if Southwest cancels a flight, according to the airline’s own Customers service policy, exactly as all major airlines are obligated to do by the Department of Transportation.

In an interview with USA Today, a Southwest official stated that all impacted passengers will get coupons automatically through email, but that the emails could be delayed due to the “amount of consumers we are processing.” Last weekend, Southwest began delaying hundreds of flights, citing weather and “other external limitations” as reasons for the delays but denied that the delays were caused by workers staging “sickouts” in protest of the company vaccine mandates.