For pet owners, using a robot vacuum has always been a bit risky. If your less-than-perfectly-trained dog or cat also does its thing while you’re gone, leaving a robovac to do its thing can be an issue. A short Google search for “Roomba dog poop” can give you a sense of what may happen when unwitting robots with spinning brushes barrel into the mess and spread it generously throughout the house.

However, iRobot, the maker of the Roomba, claims to have resolved the scatological issue. The Roomba j7+, the company’s newest robovac, has built-in machine vision and AI to detect and avoid various pet messes. Colin Angle, the founder and CEO of iRobot, tells The Verge, “It’s a significant thing for us.” 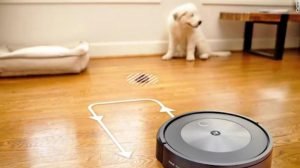 This last point is especially crucial. Competing robovacs, such as the Roborock S6 MaxV and 360 Smart Life robot vacuum, claim to have similar mess-avoiding capabilities, but Angle is unconvinced. He claims that iRobot has been working on the issue for years, even building a massive library of fictitious pet crap to train its AI vision systems.The fact that iRobot’s latest robot vacuum cleaner has a headlining feature of avoiding dog mess suggests some issues and progress with these machines. They’ve undoubtedly improved in efficiency and utility over time, but there are still a few minor kinks to work out when the rubber meets the carpet.

With an update to its navigation and control software, iRobot Genius, iRobot hopes to address some of these issues. This was first released for compatible Roombas in August of last year, and it not only maps users’ houses to allow for more granular cleaning instructions, but it also uses built-in machine vision to recognise furniture and designated “clean zones.”