Reese’s is releasing its largest peanut butter cup ever: a nine-inch Thanksgiving Pie. The super-sized peanut butter cup is the size of an actual pie, with a 9-inch diameter and weighing in at 3.4 pounds.Bo Jones, senior associate brand manager at Reese’s said that when you bring together friends and family for Thanksgiving dinner, the notable spread is complete without dessert. At Reese’s, they wanted to create a dessert that everyone wants a piece of. People can thank us later. Only 3,000 pies are available for purchase on Hershey’s website for $44.99 plus tax.

Earlier this year, Hershey’s released an all peanut butter cup without chocolate. It was the first time in the company’s 90-year-history that its peanut butter cups had taken chocolate completely out of the equation. Versions of the Peanut Butter Lovers Cup came out in 2019 and 2020, but those still contained some chocolate. 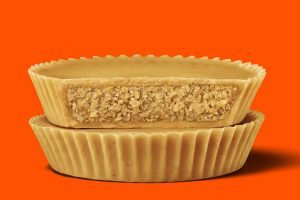 Hershey, like other confectioners, relies on impulse purchases to drive sales. In 2020, the candy company released peanut butter cups filled with pretzels and peanut butter and chocolate Snack Cake is billed as a mid-morning snack.

Over the years, Hershey has innovated its product lines and generated strange offshoots of its core existing products. Last December, Hershey launched Reese’s Snack Cakes, billed as a midmorning snack (akin to a coffee cake). In 2019, Hershey collaborated with Yuengling  to concoct a new chocolate porter, which was made available in bars and restaurants across 22 states.