Rattlesnake plays smart with a trick of its own

Rattlesnake plays smart with a trick of its own

Rattlesnake enhance their rattling sound as possible threat comes close, and this sudden shift to a high-frequency mode makes spectators, even humans vas well believe they are closer the actual distance.

Boris Chagnaud, senior author said that the data provided in the study show that the acoustic display of Rattlesnake that has been construed for decades as a basic acoustic warning sign regarding the presence of the snake, is actually a far more complicated interspecies interaction signal. The rapid switch to the high-frequency mode reports an intelligent move in fooling the one approaching close. The misconception of distance by the listener thus produces a distance safety margin. 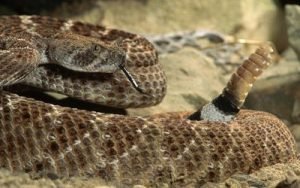 Rattlesnake robustly shake their tails to provide warning others regarding their presence. Previous studies have indicated that rattling differs in frequency, but it is not actually known that the behavioral relevance of this act or what kind of signal it sends to the listeners. A hint to this mystery came in a trip to animal facility, where Chagnaud observed that as he went closer to the Rattlesnake the frequency of rattling increases and it dropped as he went far.

Based on this basic study, Chagnaud and his fellow researchers carried out experiments in which things seemed to move closer to the Rattlesnake. As the latent threats came closer, the rattling went to nearly 40 Hz and then suddenly moved to an even greater frequency carrying in between 60 to 100 Hz.The research further concluded that the changed the rattling in reference with the velocity of the approaching object and not the size of it.