The leader of the biggest railroad union in the country is fighting back against a report meant to restart stagnant Contract negotiations because, in his opinion, it doesn’t do enough to improve working conditions. This week, the railroads made it known that they were prepared to negotiate a solution by the recommendations of the Presidential Emergency Board, which President Biden created last month. According to the idea, 115,000 rail workers would receive 24% pay hikes and incentives worth thousands of dollars. The union’s statements suggest that the workers might not be prepared to sign off.

Federal law would permit a strike or lockout if the parties cannot agree on a new pact by the middle of September. At that time, Congress is anticipated to intervene to maintain the supply chain. Businesses that depend on Union Pacific, BNSF, Norfolk Southern, CSX, and other large freight railways to provide raw materials and ship their goods might be destroyed by a railroad strike. 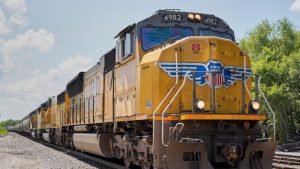 According to Jeremy Ferguson, head of the union representing conductors, Sheet Metal, Air, Rail, and Transportation Workers — Transportation Division, the advisory board’s recommendations were a “great improvement” over the railways’ earlier suggestions. The proposals don’t go far enough to give our members the standard of living they’ve worked hard for and deserve for themselves and their families. There have been no comments on the specifics from the other 11 unions involved in the Contract negotiations.

Ferguson’s remarks reflect some of the worries specific railroad employees have been raising online since the study was made public on Tuesday. The railways’ demand to reduce train crews from two to one has been a major point of contention in the negotiations. According to them, the unions vehemently oppose that action, not only to defend jobs but also because of safety concerns. The railways assert that because they reorganized their operations to run fewer, longer trains, they no longer require as many personnel and engines as they once did.