People Who Lost Their Loved Ones are Getting Vaccinated People Who Lost Their Loved Ones are Getting Vaccinated

A doctor in Alabama had a disturbing message for those who are still not willing to get Vaccinated.Dr. Brytney Cobia, a physician at Grandview Medical Centre in Birmingham, described in detail how numerous “young healthy people” have been admitted to the hospital due to very serious Covid infections, she explained in a Facebook post.

Cobia’s post and the succeeding interviews have led to many threats, as she revealed recently. Her message came out when Alabama reported the lowest rates of vaccination in the country and highlights the challenges which health officials have faced to boost up the confidence of getting the vaccine in the state. 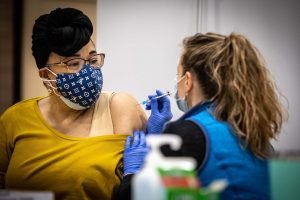 According to the data released by the Alabama Department of Public Health, only 33.9 percent of the eligible population has been entirely Vaccinated, and 41.5 percent has received at least one dose of the vaccine.Yet it is being realized by the people only after they are losing their loved ones that getting Vaccinated is actually important to stay safe from the deadly virus, and Cobia shared on Sunday.

The state’s distribution of doses peaked during early April — along with a record of over 45,181 shots being administered on a single day. Since then, the rate of vaccinations has dropped, with 6,118 people getting Vaccinated on Thursday, according to Alabama’s official vaccine dashboard.