Microsoft CEO Satya Nadella has sold half of his shares in the tech giant, The Wall Street Journal reported, citing a federal securities filing. The report said that Nadella sold 838,584 shares over two days between Nov. 22 and Nov. 23 for more than $285 million. He retained ownership of 831,000 shares following that transaction.

Microsoft CEO disclosed the sale in an SEC filing. Satya sold approximately 840,000 shares of his holdings of Microsoft stock for personal financial planning and diversification reasons. He is committed to the continued success of the company and his holdings significantly exceed the holding requirements set by the Microsoft Board of Directors. 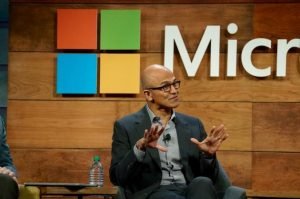 Microsoft spokesman said in a written statement to the Journal.However, the Journal reported Nadella could have sold his shares due to a Washington state law, approved to begin in 2022, that would impose a 7 percent tax on long-term capital gains over $250,000. did not immediately respond to The Hill’s request for comment.

Nadella was named CEO in February 2014 and previously held leadership roles in both enterprise and consumer businesses across the company. Since taking over at the company’s helm, the Journal noted that the company is trading at a $2.53 trillion market capitalization, up about 780 percent since he was appointed CEO.Nadella’s stock sale follows a similar one by Tesla CEO Elon Musk, who sold more than 930,000 shares of Tesla stock, according to financial disclosure documents published in November, in a sale worth more than $1.1 billion.