Mercedes-Benz continues to make good on its promise to go all-electric by 2030. The announcement of the AMG EQE, a high-performance version of the automaker’s electric E-class sedan.The AMG EQE is the second battery-electric production car from the automaker’s in-house performance AMG subsidiary, following the AMG EQS sedan announced last September. Both cars will be built on Mercedes’ EVA2 platform, which underpins the EQS, the smaller EQE, and several SUV sister models.

The EVA2 is designed for medium and large vehicles, while the automaker’s MMA (Mercedes Modular Architecture), debuting in 2025, will be for electric compact cars such as the EQA and EQB. The new Mercedes-AMG EQE will be wicked fast, boasting a 0–60mph acceleration of 3.2 seconds as a top speed of 149 mph with the Dynamic Plus package. 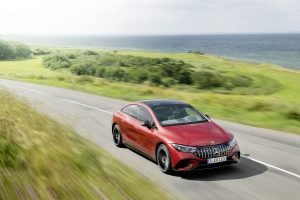 Its dual electric motors put out 677 horsepower and 738 ft-lbs of torque when equipped with the AMG Dynamic Plus package and boost function.The 328-volt battery has a usable energy content of 90.6kWh and consists of 10 modules with a total of 360 pouch cells. The estimated range is between 444-518 km, which translates to 275-321 miles although Mercedes-Benz says that the measurements will be released closer to launch

Mercedes-Benz says it has reduced the cobalt content of the battery’s chemistry to 10%. Cobalt is the most expensive material used in batteries, so eliminating it from the mix is expected to help EVs become as affordable as those that run on gas. It has also been called the “blood diamond of batteries” because it’s been mined in a way that endangered child workers and wrecked the environment in the Democratic Republic of Congo.