LEGO unveils the set modelled after Titanic this year. This is the largest set the company has ever made. The company also added that the set will be sold for $600.

The toymaker said that the largest replica has 9,090 pieces and it is nearly 4 feet. The company revealed the product by showing off the First-Class grand staircase, Jacobean-style dining saloon and more. 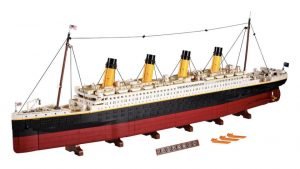 Mike Psiaki, design master at the LEGO Group said that designing the LEGO Titanic with such a focus on immense detail and scale. They also focused on accuracy and that has allowed them to create one of the most challenging building experiences to date. We know brick builders and ship enthusiasts of all ages will love building the set and displaying it in their homes.

The RMS Titanic set sail in 1912. It sank in the Atlantic Ocean after striking an iceberg, and more than 1,500 people died.  The LEGO set will be available for preorder beginning Nov. 1, but it might be costly for those who are interested in the historic ship. LEGO recommended retail price for the replica is $629.99. Social media users were quick to react to the model’s size and price – in addition to making comparisons to the real ship.