According to the Labor Department, the labour market tightened further last week, with new Jobless claims falling to their lowest level in more than 53 years. Initial Jobless claims fell to 166,000, much below the Dow Jones forecast of 200,000 and 5,000 below the previous week’s number, substantially revised down.

The department stated that claims were amended from 2017 to 2021, and that the seasonal parameters used to generate the statistics were modified. The total for the week was the lowest since November 1968. Nonetheless, the figures indicate a severely understaffed labor market. There are around 5 million more job opportunities than available employees, causing pay increases and contributing to rising inflation. 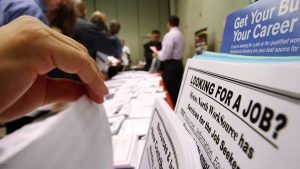 Officials at the Federal Reserve are hiking interest rates to curb excessive demand that has arisen as a result of persistent supply chain issues. Despite the economy’s challenges, nonfarm payrolls increased by about 1.7 million in the first quarter of 2022, indicating that hiring has remained strong.

On the other hand, continuing claims increased by 1.52 million, according to figures released a week after the headline number. The overall number of people getting assistance from all programs fell to 1.72 million. When the government offered additional help to employees displaced by Covid a year ago, the figure was 18.4 million. The pandemic’s resurgence throughout the winter had minimal effect on overall employment figures.