Jobless Claim Continue to Drop in the United States Jobless Claim Continue to Drop in the United States

Last week, the number of Americans filing for unemployment benefits hit a record low since the epidemic began, indicating that layoffs are dwindling as businesses try to hang on to their employees.The Labor Department said Thursday that unemployment claims fell 6,000 to 290,000 last week, the third consecutive decline.

This is the lowest number of persons that have applied for assistance since the epidemic began on March 14, 2020. Jobless Claim applications, which usually mirror the rate of layoffs, have gradually declined from about 900,000 in January.Although unemployment claims are gradually returning to normal, many other components of the labour market have not. 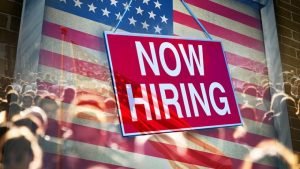 Many corporations and other employers have posted a near-record number of vacant positions in the last two months, hiring has slowed. As schools returned, reducing child care limitations, and increased unemployment benefits ended countrywide, officials such as Federal Reserve Chair Jerome Powell predicted that more individuals would find jobs in September.

Christopher Waller, a member of the Federal Reserve Board of Governors, warned on Tuesday that two million of the 22 million jobs lost to the pandemic may not be replaced anytime soon since retirements have advanced so fast since COVID-19 struck. The number of Americans getting unemployment benefits continues to decline, according to data released by the Labor Department on Thursday. According to the most recent data available, 3.3 million persons got unemployment benefits in the week of Oct. 2, down from 3.6 million the week before.Nearly 24 million people were receiving Jobless Claim a year ago.