Two astronauts fitted the mount for a new solar array outside the International Space Station during the first spacewalk without an American or Russian crew member. On Sunday, Japanese astronaut Akihiko Hoshide and French astronaut Thomas Pesquet of the European Space Agency (ESA) spent six hours and 54 minutes working in the vacuum of space, both wearing US spacesuits with their respective countries flags on their left shoulders (Sept. 12).

The extravehicular activity (EVA) commenced when the two Expedition 65 crewmates switched their suits to battery power at 8:15 a.m. EDT (1215 GMT), the extravehicular activity (EVA) commenced. After exiting the US Quest airlock, Hoshide and Pesquet made their way to P4 on the backbone truss of the space station, which is on the port (or left) side. They collaborated to create a bracket construction known as a modification kit, which they then affixed to the mast canister at the foot of one of the existing P4 solar arrays. 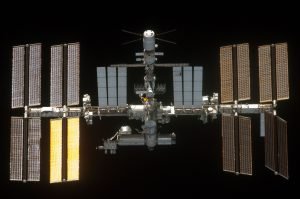 The equipment prepped the installation and deployment of the third of six new Roll-Out Solar Arrays for the International Space Station (iROSAs). The array will improve one of the station’s eight power channels, 4A, which supplies partial power to the US Destiny lab, the Harmony node, and the European Columbus module.

After its delivery to the space station by a SpaceX Dragon cargo mission in 2022, the P4/4A IROSA will be added during a future spacewalk. As they approach and surpass their 15-year service life, the station’s original solar arrays have begun to exhibit indications of damage. The new solar arrays on the way will boost the station’s electrical supply by 20 to 30%. In addition, the pieces of NASA’s Gateway, a lunar orbit outpost created by the agency’s commercial and international partners, will be powered by the same iROSA architecture.