Halo has announced a new service coming to Las Vegas later this year: a fleet of remotely operated electric vehicles, using T-Mobile’s 5G network. It is potentially a big step toward fulfilling the promise of 5G remote driver tech, with a significant catch: the cars don’t operate solely on T-Mobile 5G.While it’s the primary network they’ll use mid- and low-band 5G, specifically, with LTE as a fallback they will also depend on other networks. Halo employs remote drivers to operate the vehicles, delivering them to waiting customers who then get behind the wheel and take the car to their destination. 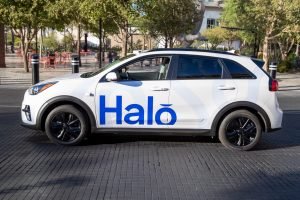 When the trip has ended, the car moves on to its next pick-up under remote control. Halo is operating test drives with safety drivers in vehicles, which it says won’t include when the service launches for paying customers. There’s no shortage of driverless and autonomous vehicle pilot programs in Las Vegas; Lyft has operated a driverless taxi service in the city, and more recently Motional has been testing autonomous rides without a backup driver behind the wheel.

Halo is using a remote driver, along with an Advanced Safe Stop mechanism to automatically bring the car to a halt if a hazard is detected. The company says that ultimately it hopes to achieve full autonomy and that in the meantime it’s vehicles are designed to learn from their human operators. Fully remote driverless vehicles have been one of the promises of 5G, and it’s a use case that demands the speed and low latency that 5G connectivity is capable of delivering.