Gas is Cheaper but Groceries are Not Gas is Cheaper but Groceries are Not

Food prices up 1.1% in July, bringing the year-over-year gain to 10.9%, according to the most recent Consumer Price Index data, despite the fact that inflation as a whole started to decline last month along with gas prices. The highest 12-month gain since 1979 was recorded by the food-at-home index, which tracks increases in Groceries store prices.

Costs for cereals and baked items have increased by 15% since last year. Fruits and vegetables have increased by 9.3% year over year, while milk and dairy products have increased by 14.9%. Greg McBride, chief financial analyst at Bankrate.com, stated that although consumers are receiving a break at the petrol pump, they are not in the Groceries store. “Eating prices continue to surge, climbing at the quickest rate in more than 43 years, notably those for food at home.” 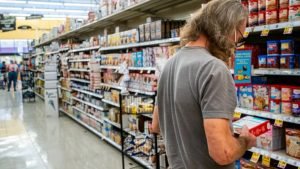 Consumers anticipate that prices will eventually decrease since the Federal Reserve has already taken serious action to combat the inflation crisis. The Federal Reserve Bank of New York’s monthly Survey of Consumer Expectations indicates that they are still anticipated to increase 6.7% over the following 12 months, although this is a significant decrease from June.

In 2022, the central bank has increased its benchmark rate by 2.25 percentage points, and it has hinted that further rises are on the way.It will, however, take some time for [the Fed’s rate-hike cycle] to complete, according to Tomas Philipson, a professor of public policy studies at the University of Chicago and a former acting head of the White House Council of Economic Advisers.