The Joint European Torus (JET) Fusion reactor in the UK has generated the highest sustained energy ever from atom Fusion. On December 21st, 2021, the “tokamak” reactor produced 59 megajoules of energy during a five-second Fusion pulse. That’s double what it created back in 1997. 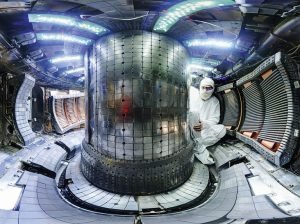 The JET reactor is the flagship experimental device of the European Fusion Program, funded by the EU. It’s mainly designed to prove scientists’ modeling efforts, with an eye on future, more extensive experiments with a much larger ITER reactor in France, set to start Fusion testing in 2025.

JET hit a Q value of 0.33, meaning it produced about a third of the energy put in. The highest Q value achieved so far is 0.7 by the US Department of Energy’s National Ignition Facility, but it only hit that figure for four billionths of a second. The goal with ITER is to reach a Q factor of 10 or greater.