A SpaceX Falcon 9 rocket carried 88 satellites into orbit in one fell swoop on Wednesday, marking the company’s second dedicated rideshare mission. The rocket took off from Florida’s Cape Canaveral Space Force Station at 3:31 pm ET and flew southward along the east coast as it hurtled toward space.

The satellites delivered to orbit were from a range of government and commercial customers including NASA and radar satellite company ICEYE as well as three satellites for SpaceX Starlink internet constellation. The SpaceX Falcon 9’s first-stage rocket booster, the large lower portion that houses the engines that give the rocket its initial thrust at liftoff came back to land upright on a ground pad so that it can be refurbished and used again on future missions. 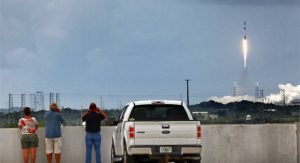 The cost savings SpaceX Falcon 9 says it nets by re-using spaceflight hardware is considered key to making spaceflight cheaper. The booster used Wednesday was previously used on seven other launches, and each half of the rocket’s fairing, the dome-shaped cap atop the rocket that protects the satellites during launch, was also used on previous missions.

SpaceX is well known for carrying satellites, cargo and more recently astronauts into orbit atop its Falcon 9 rockets, but the company earlier this year began its foray into carrying rideshare launches for numerous customers, in which the rocket’s cargo bay is stuffed with batches of small satellites that belong to a variety of SpaceX customers. The rideshare missions serve as a way for SpaceX to tap into the booming demand for getting small satellites, or smallsats, into orbit.