Elon Musk said on Monday that his electric vehicle company has not signed a contract with rental car company Hertz. The tweet from Musk seemingly contradicted a prior announcement and advertisement released by Hertz on Oct. 25.

Tesla hit a $1 trillion market cap for the first time a week ago after Hertz announced it would grow its fleet of battery-electric vehicles with an initial order of 100,000 by the end of 2022. A commercial featuring seven-time Super Bowl champion Tom Brady, alongside parked Tesla Model 3 electric sedans in a Hertz garage, accompanied the announcement. 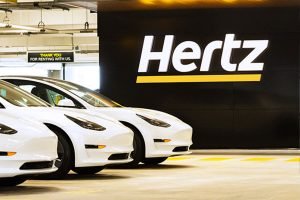 A Hertz spokeswoman declined to discuss specific details of the agreement. She said the company remains on plan to offer the vehicles by the end of 2022. She said Tesla has already started delivering cars into its rental fleet. did not respond to comment.Interim Hertz CEO Mark Fields last week said the rental company started talking with Tesla “many months ago” about the purchase of the vehicles. He described it as a “great relationship” and part of Hertz’s move to lead rental companies in managing large fleets of EVs.

Shareholders and analysts responded favourably to the idea of  selling 100,000 fully electric vehicles to Hertz. The move was seen as a sign that battery-electric cars were going more mainstream. Since  Oct. 22 close before the announcement, the stock has surged around 33%. Musk, who owns around 20% of Tesla, has seen his net worth rise with the electric vehicle maker’s share price. He is now the world’s wealthiest person.