Former President Donald Trump did not make it to Forbes’s list of America’s richest people. The former president’s fortune dropped to $2.5 billion which is $400 million short of the cutoff needed to make the list.Forbes also added that this is the first time in 25 years Trump has not been on Forbes 400, with him on the top half of the list from 1997 to 2016 until he became president. Donald Trump could have been worth around $7 billion by September 2021 in a different situation but his financial decisions brought him down.

One decision made by Donald Trump nearly cost him $2 billion was reclining on to his possession when he took office in 2017. Another blow to Trump’s fortune was the coronavirus pandemic. Cryptocurrency, stocks and assets rose during the pandemic, a lot of Trump’s wealth comes from his big-city properties. 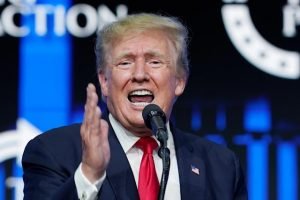 In April, Forbes’s billionaires’ list showed Trump dropped 300 spots and his fortune decreased by more than $1 billion during his presidency. Trump’s refusal to divest from his business ventures throughout his presidency earned him a torrent of criticism from ethics experts, including former Office of Government Ethics Director Walter Shaub.