The number of newly discovered cases of Covid-19 has been rising in New York since the start of July 2021.The state has confirmed a total of 573 new cases on Sunday and 666 on Saturday. That is up from the end of June when the new cases had reached their lowest levels of the pandemic.

The weekly average of newer cases has climbed up from a low of 307 on June 25 to 490 on July 8, an increase of over 59%.The percentage of people who have been tested positive for Covid-19 has also been rising during the recent weeks and was reported to be 1.1% on Monday. At points, in June, the positive test rate fell as low as a percent of 0.3%. 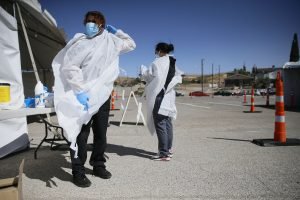 New cases reached an all-time high level of nearly 20,000 each day in January and the weekly average of the positive test rate was nearly 8% statewide.And while the case numbers started to rise again, the hospitalizations have stayed low so far. 348 people in New York have been hospitalized due to Covid-19 on Monday.

Deaths have also not increased either. One new death has been reported in New York on Sunday due to Covid-19. The statewide death toll has been recorded as a sum total of 43,011.According to the Centers for Disease Control and Prevention, over 61% of all the citizens of New York have now received at least one dose of vaccine, and over 55% are completely vaccinated.