The 2023 Cadillac Lyriq electric crossover is now under production at GM’s Spring Hill, Tennessee plant. It is the first electric vehicle from the luxury brand. After GM stated that production would not begin until late 2022, the Lyriq is ahead of schedule.

The Lyriq, which debuted in August 2020, will have a starting price of $59,990, though GM has yet to reveal the trim levels and extras. With a 100.4 kWh battery pack and rear-wheel drive, the Cadillac first EV will be available in Debut Edition configuration. GM aims for an EPA-rated range of 300 miles and 340 horsepower and 324 pound-feet of torque. 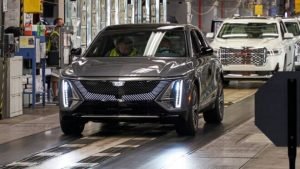 The Cadillac first EV can charge up to 190kW at public fast-charging stations or up to 19.2kW at home, giving it an additional 52 miles per hour of range. Super Cruise, a hands-free driver assistance system that began with, is rolling out to other GM vehicles. It has a large 33-inch display that runs from the driver’s left side to the dashboard’s center.

The Cadillac first EV is to be built on GM’s new flexible Ultium architecture, which is used to power the automaker’s next-generation lineup of EVs, including the Hummer EV. GM altered the chemistry of its Ultium battery cells to reduce dependency on cobalt. The first electric vehicle is the battery electronics will be incorporated directly into the modules, eliminating nearly 90 percent of the battery pack wiring compared to GM’s other EVs.