On Monday, Bitcoin prices dropped as investors evaluated the risks from rising rates and the chances for more tightening by the federal reserve. The famous cryptocurrency fell 7% to $40,009.78. Earlier the prices also dropped to $39,785.68. This is the first time since March 16 the price of the Bitcoin drops.

The price of the digital currency drop after the 10 year treasury yield which hit a high on two percentage on monday. The assets that are highly riskier have the chances to fall when the profits rise. Nasdaq dropped one percentage on monday. The digital currency should trade alone in the stock market that is correlation between the two which has been particularly high in the recent months. An analyst riyad said that the Bitcoin and traditional markets have gone against the prediction that the Fed will make more stricter monetary policy to face the inflation. The war between the Russia and ukraine, Surging covid cases in china are reflected in the market. 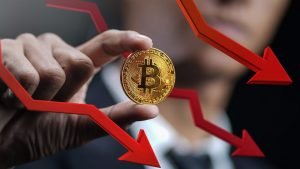 The analyst also added that the market reaction to the Terraform Labs  purchasing the digital currency for it reserves. Terraform labs owns nearly fourty thousand Bitcoin after buying $175 million worth over the weekend. The company has largely played out. The prices of the surged in the past two weeks showing a positive sign as the company started buying the digital currency.

Other the Bitcoin, the tokens also dropped in the crypto market. They declined by atleast nine percent along with other platform networks. Algorand’s was declined more than nine percentage. Other like Solana and Cardano were each down by 11%.