Alien Planets will be Explored by New Cereal Size Satellite Alien Planets will be Explored by New Cereal Size Satellite

A new cereal size Satellite designed and built at CU Boulder’s Laboratory for Atmospheric and Space Physics is providing proof that tiny things can take on big scientific challenges. The Colorado Ultraviolet Transit Experiment (CUTE) is slated to launch into space on September 27.

LASP researcher Kevin France, principal investigator for the mission said that the spacecraft worth $4 million is a smaller-than-usual type of Satellite known as a CubeSat, and is about as large as a family-sized box of Cheerios. Over the course of about 7 months, the mission will track the volatile physics around a class of extremely hot planets orbiting stars far away from Earth. 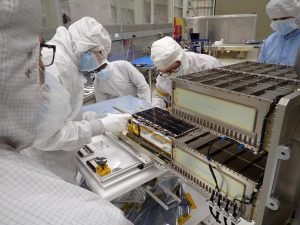 It’s the first CubeSat mission funded by NASA to peer at these distant worlds marking a major test of what small spacecraft may be capable of. France, a professor in the Department of Astrophysical and Planetary Sciences said that it is an experiment that NASA is conducting to see how much science can be done with a small Satellite.

The mission will blast off aboard a United Launch Alliance Atlas V rocket alongside the Landsat 9 Satellite from Vandenberg Space Force Base in Lompoc, California. Once the Colorado Ultraviolet Transit Experiment enters into orbit around Earth, it will set its sights on a suite of exoplanets called hot Jupiters. These gaseous planets are both large and scalding hot, reaching temperatures of thousands of degrees Fahrenheit. The Satellite findings will help scientists to better understand how these planets, and many others, evolve and even shrink over billions of years.