A Global Map to Track Next Deadly Pathogen A Global Map to Track Next Deadly Pathogen

Scientists in the U.S have revealed a global map that they believe can track the next deadly pathogen. For this study, the scientists have recorded and studied thousands of microbes from dozens of cities.

The scientists have created an urban biome tracing. Various microbes numbering over 4,000 samples have been collected from 60 different cities. The samples are identified in two types of microbes, known and unknown. The Map is known to have studied the profile of antibiotic-resistant superbugs. 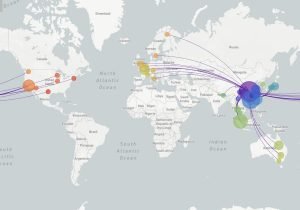 The Map are useful for the traveler or any individual who can go on these Map and click on the profile of each city and can see the percentage of bacteria in the particular city. The researchers and scientists believe that each city has a unique microbe core. The researchers have seen variations in the composition of microorganisms according to the changing geographic location.The reasons for these variations that the researchers believe are the changes in human skin, soil, and wastewater.

To study the microbes in cities, the researchers in 2015 had launched a program named MetaSUB Consortium. Since 2015, the researchers have collected over 4,000 samples from 60 different cities in the U.S. The scientists state that the study can be helpful to monitor the microorganisms in real-time.  However, the scientists were unable to measure the RNA viruses. Also, they could not identify the percentage of DNA included in the microorganisms and could not separate the anti-biotic resistant bacteria from microbes that were not resistant.