Adrian Melott from the University of Kansas, who co-authored a 2018 study detailing this catastrophic event, said that the hypothesis is that a giant comet fragmented, and the chunks impacted the Earth’s, causing this disaster. A number of different chemical signatures – carbon dioxide, nitrate, ammonia, and others – all seem to indicate that an astonishing 10% of the Earth’s land surface, or about 10 million square kilometers, was consumed by fires.

A large number of geochemical and isotopic markers were measured from more than 170 sites worldwide, involving a team of 24 scientists. One of the pieces of analysis carried out was on patterns in pollen levels, which suggested pine forests were suddenly burned off to be replaced by poplar trees – a species specializing in covering the barren ground, as you might get when a series of massive fireballs have hit your planet. 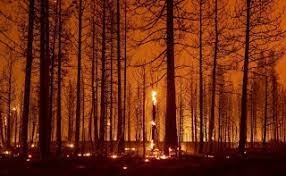 Parts of the comet that disintegrated in space are still likely to be floating around our Solar System 13,000 years later. High concentrations of platinum – often found in asteroids and comets – and high levels of dust were also noted in the samples analyzed by the researchers; alongside increased concentrations of combustion aerosols, you would expect to see if a lot of biomass was burning: ammonium, nitrate, and others.

Plants died off, food sources would have been scarce, and the previously retreating glaciers began to advance again, the team noted. Human culture would have had to adapt to the harsher conditions, with populations declining as a result.